“Nostalgia – it’s delicate, but potent. Teddy told me that in Greek, “nostalgia” literally means “the pain from an old wound.” It’s a twinge in your heart far more powerful than memory alone. This device isn’t a spaceship, it’s a time machine. It goes backwards, and forwards… it takes us to a place where we ache to go again. It’s not called the wheel, it’s called the carousel. It let’s us travel the way a child travels – around and around, and back home again, to a place where we know are loved.” – Don Draper in Mad Men “The Wheel” written by Matthew Weiner & Robin Veith.

Nostalgia can be a dangerous trap. I put on the rose-colored lenses of yesteryear plenty but it’s important to remember that 2016 and 2017 are coming. 1976 and 1977 are not.

I had an amazing psychology professor at Emerson named Dr. Peter Corea. I’m hopeful you’ve heard of him. Great teacher, great man. “The past doesn’t exist anymore,” he often said. But we try to keep it alive since the past lives so vibrantly in our minds, our dreams, our remembrances.

As a late 30-something born in the mid-1970’s, “Star Wars” was a huge part of my childhood, like millions upon millions of others. Most likely, like yourself. It’s not really an exaggeration to say that “Star Wars” defined my childhood. You may be able to say the same thing.

I remember when the prequels came out and some folks would ask “Why are people so excited? It’s just a movie.” I felt so sorry for those folks. And still do. Did they not spend countless Sunday afternoons watching Empire Strikes Back while building their own version of Bespin out of blocks inhabited by thick plastic kenner toys? Did they not turn piles of sand in the backyard into the Pit of Karkoon, nest of the devouring Sarlaac? Did they not feel the sheer agony of getting a Kenner toy catalogue only to see some pages blacked out so not to spoil the reveal of Jabba The Hut or the Ewoks? (Spoilers were not invented by the internet, kids.) What kind of bleak nightmarish Star-War-less childhood did they live? Probably one filled with sports, caring friends and other fun things but you get my drift.

I remember in 1998 when this first aired and I just couldn’t believe it. After 16 years, more Star Wars was really happening:

Watching that again, I actually STILL get goosebumps despite knowing what happens next. Now, the purpose of this blog is not cut apart or Monday Morning Quarterback the prequels. The internet is filled with people bemoaning what went wrong to the point where the subject has become a bore. I’ve heard of some intrepid filmmakers endeavoring on recuts for private screenings. And even I myself may one day sit down and write my spec-prequel screenplays that are tinkering around in my head. Not for any public consumption, just to see how they’d turn out actually on paper.

This is post is not about bashing George Lucas, though a criticism or two may turn up. Mr. Lucas gave the world the original Star Wars trilogy and the Indiana Jones trilogy. If I ever get the privilege to meet Mr. Lucas, I would gladly shake his hand and say “Thanks.”

Try as I might to fight nostalgia, her grip can sometimes be too great to ignore. Because I remember.

I remember being unable to sleep because we were going to see “Return Of The Jedi” in the theatres the next day. And I had already seen it like 7 times. I remember the displays of Star Wars toys like an endless sea of cardboard & plastic in the malls. I remember collecting the Topps trading cards and flicking through them as fast as I can to try to recreate the experience of the movies. I can actually remember faint images of the speeder bike from being taken to the “Star Wars” re-release in 1979. I remember glimpses of “Empire Strikes Back,” seeing someone get their hand chopped off. And I can remember the “Return Of The Jedi” trailer before seeing it for the first time.

I remember as a kid playing around pine trees under blue skies and how much it looked like Endor. I remember the magical color of the twilights outside of the movie theatre waiting to get inside to see Return Of The Jedi for the it-doesn’t-matter-how-many time.

Star Wars opened up the imagination and wonder to an entire generation of kids. But it did so at a time of pure innocence so as a result, this is no longer a film franchise. This is something sacrosanct, something precious, something that swells our hearts with ecstasy.

I recently saw a documentary in which a theologian described religion as the search or ecstasy in life. Comparing fandom to religion is a dicey proposition but there are similarities. For example, the concepts of commandments and blasphemy live loud and clear in the world of pop culture.

“Stop messing with my childhood” cry many corners of the internet when a remake of a childhood classic is announced. What baffles me is how a remake can ever mess with anyone’s childhood. I own many of my favorite movies & TV shows as a kid on DVD or Blu Ray. No one is going to take those away from me. And no one can possibly take away your childhood memories from you.

I respectfully didn’t care for Michael Bay’s Transformers movies. Doesn’t matter for two reasons – 1) I own the original Transformers series on DVD 2) Mr. Bay’s Transformers movies have seduced billions of box office dollars out of the general public so he’s not going to mind me passing. And I don’t mind him making whatever weird version of Galvatron he wants because I have my originals. Peace in the valley.

Hopefully one day we’ll have the original trilogy on Blu Ray. There’ve many announcements only to get debunked quickly.

Personally, I think that many people get upset about remakes of their childhood classics because it’s a reminder of the one thing we don’t want to get reminded about.

We’re getting old. We’re getting older. And we’re growing out of the demographic that movies are made for. Pop culture doesn’t belong to us anymore. The tighter we grip, the more franchises slip through our fingers.

That news about Chris Pratt playing Indiana Jones? Those movies aren’t being made for those of us who saw all three Indiana Jones movies in the theatre. It’s for everyone born after 1989 who never got that experience but would like THEIR Indiana Jones.

(Before you email, yes, I know there was a fourth Indiana Jones film. I’ve not seen and based upon what I’ve heard, I probably never will.)

With each passing day, our own childhoods slip further away becoming more and more unattainable. But still we search for as many grains from the sands of innocence as we can.

I have seen an extraordinary excitement for the new Star Wars trilogy. My friends, your friends, possibly you are eagerly and desperately caught up in that wave hoping against hoping that “The Force Awakens” will bring back – even if just for a few hours – those blue skies and magical sunsets.

I haven’t seen this sort of anticipation since…well, since 1998 & 1999 before The Phantom Menace came out.

I watched the latest Force Awakens trailer. Goosebumps. Excitement. A lump in my throat. Guilty of all of the above.

And then a few hours later, I remember.

I remember driving across New England through rainstorms to get to the opening night premiere of “The Phantom Menace.” All I’ll say about that night and it’s the saddest thing I could say – a father in the row behind me had to explain every step of the movie to his kids. Can you imagine? Kids NOT understanding a Star Wars movie.

I remember my girlfriend at the time being bored into a deep sleep by Episode I.

I remember the audience laughing out loud at the pasture scene in Episode II.

I remember storming out of Episode III when the movie was over mad at the incoherent mess of trying to tie up loose ends as quickly as possible.

My social media is filled these days with all manner of Star Wars things. The Princess Leia pic being just the latest. The internet is filled with dissertations and analysis of THE TEASERS. Fluff pieces on the news tell of airplanes designed after R2-D2. That’s how much Star Wars means to people. Even the smallest tidbit or iconography will send waves of ecstasy across our culture.

Like I said, I’m not posting any of that stuff. Not because I don’t like it or don’t think it’s cool. But because I remember the sting of the disappointment. Not going opening weekend. Not doing it. I’m going to wait until Monday to make sure the Force isn’t awakening in the Kingdom of the Crystal Skull. I can’t forget that’s why my optimism and cynicism are neck-and-neck in this one. And at the end of the day, I’m a pragmatist believe it or not.

Being in the entertainment industry, one hears a lot of rumors and gossip from sets. I’ve heard good things about The Force Awakens. I’ve also heard bad things. But again it’s all rumor so not worth repeating here.

There’s no questioning the dedication that JJ Abrahams has to Star Wars. And I truly on & off the record wish him & his team all the success in the world. I’d love it if I meet him one day, shake his hand and say “Thanks for saving Star Wars.”

I will be ramping for the new movies, don’t worry. One can’t or shouldn’t completely quash optimism just so one isn’t disappointed. Though I won’t be joining others squeeing at the sight of an X-Wing or something like that, I’m breaking out the Kyle Katarn video games. Yup, all of them. From Dark Forces to Jedi Academy. I should be able to replay the saga between now and Christmas. And I don’t care what anyone says or what the new movie does about it – the adventures of Kyle Katarn are canon. Mara Jade is in them after all 😉 And these were closest thing, for me, to the rekindling the excitement original Star Wars trilogy since 1983:

I remember growing up and watching the Star Wars trilogy over and over. As I went from a kid who loved laser-blasts into teenager learning how to write, I realized what Star Wars is.

Star Wars is Luke Skywalker hanging onto the scaffolding under Bespin with one hand, after receiving the shock of his life learning who his Father really is. He has no hope. He has no way out. He is trapped and left for dead. And then he uses the Force to contact Princess Leia. Princess Leia, who has no experience/knowledge of The Force that we’ve seen yet, hears his call. So powerful is what she hears that not going back for him is out the question. THAT is the Force. THAT is what Star Wars is all about.

Underneath all the lasers, explosions and monsters are a group of people who when faced with the worst possible circumstances will do anything for each other.

“We’re home,” Han Solo says. I hope with all my might you are, Han. Because then maybe the rest of will be home for a little while as well. 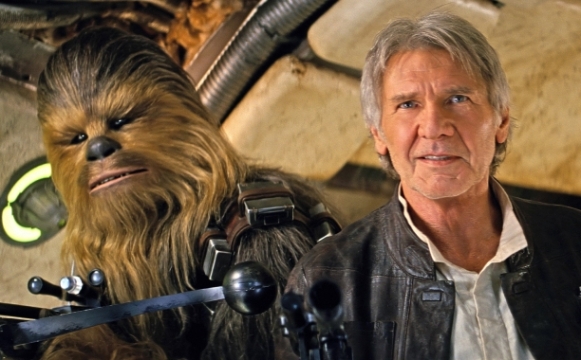