Over on social media, I like to write little tributes and obituaries to notable deaths, partly as an industry pro and partly because I find it interesting. I don’t get too personal about certain family events and passings on facebook because for whatever reason I don’t alway find it appropriate. But this week those two things sort of collided. 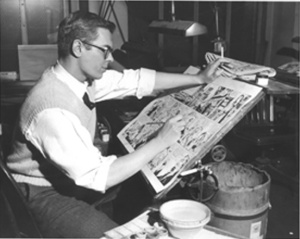 Leonard Starr was my father’s cousin. He made his living as an illustrator and comic strip artist. The piece he was most well-know for were Mary Perkins On Stage and the adventures of Little Orphan Annie and her faithful dog Sandy in daily comic strips from 1979 – 2000. He was even given an onset tour of the movie with pictures from the set decorating his kitchen.

What Leonard will most be famous for (and what was often a party topic for me to bring up) was being hired to develop a team of “Supercats” into a cartoon show for producers Rankin & Bass. So impressed were they by his drawings, they commissioned Leonard to be the head writer of the show now called “Thundercats.” So yes, my uncle Leonard was a creative force behind “Thundercats.” Leonard was always bemused by the fame of “Thundercats” especially in recent years as the retro craze swept over pop culture.

His influence on me was rather unconscious. He never told me to pursue a career in movies or TV. But when I was 6 years old, I saw my uncle’s name on TV in the credits. So the idea of working in Hollywood writing movies & TV was never baffling or bizarre to me. It wasn’t a world a million miles away. It was a vocation like any other so for that influence of success I’ll always be grateful. And when I did finally venture forth in 2003, Leonard was always open in sharing much advice from his experiences. Two phrases which have rung particularly true: “It’s an assault” and on how to make it as a professional writer: “Keep doing it just keep doing it because the next thing you know, you’re doing it.”

His home was filled with drawings, paintings, mountains of opera & classical CDs and thousands upon thousands of books. An expert in literature in Shakespeare, when his nephew Handsome Timmy D stopped by Westport, CT on his cross-country trip, I was given an education on Henry V over some expensive scotch until about 3 AM. The next morning Leonard was up before with less of a hangover.

Leonard was stricken several forms of cancer of the past year, finally winning the battle at around 12 Noon EST. Until the end, Leonard was still writing, drawing and listening to his beloved opera. Leonard is survived by his wife, Bobbi. Safe travels to Leonard Starr who was 89 years young.