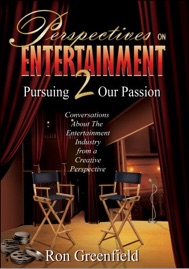 After months of interviewing others, I was very delighted and flattered to be interviewed by my friend and colleague, Ron Greenfield. Ron offered one of the most informative episodes of the Express thanks to his hands-on, in-the-room experience in many areas of the entertainment business.

Just released is Perspectives Of Entertainment 2 in which Ron interviews a great number of esteemed artists pursuing the creative life. It is a great thrill that he included me in such august company and I hope I was able to offer some valuable words.  This new collection is a must-read for those looking to break-in to show business or those who just fascinated by it because you’re hearing from folks who have truly “been there, done that” and are still doing it.

From the Press Release:

Ron Greenfield is a recognized authority on the Entertainment Industry who has just released his second book, “Perspectives on Entertainment 2, Pursuing Our Passion” on Amazon  http://www.amazon.com/dp/B014GBQTIA and iTunes https://itunes.apple.com/us/book/id1033732329  It is an exploration into the creative process, conducted through a series of interviews, with extraordinarily talented individuals, providing an insider’s view into the highs, lows, triumphs and setbacks they have encountered in their respective careers in this industry.

Each person sheds light on their individual creative process which enables them to work and realize their creative ambitions under the illumination of the entertainment spotlight. The conversations vary in length, but get to the heart of the matter: their creative aspirations, ambitions, and the work they do. Each interview is an excursion, moving through the worlds of the Broadway Theater, dance, and nightclub performers to the complexities of game development, writing, pod-casting, acting, and preserving our film heritage.

“I’m the audience…There has to be something relatable to the audience…something that is unique.” – Neal Rubinstein, Broadway Producer

“I’m here to sing for you and to take you away because I’m an entertainer. I’m singing about something you can relate to.”   – Karen Wyman, Entertainer and Performer

“I always felt a bit more comfortable with costume design…I like working with actors, and I like the collaboration it involves.” – Jess Goldstein, Costume Designer

“…the bar is set very high these days, and so the people I represent and other publicists represent have to have something special to stand out above the crowd.”  – Lisa Wartur, CEO and Publicist, Noodlehead Productions

“You have to write, write, write, all the time. Write screenplays. Write treatments. Write notes… Help inspiration out with exploring this stuff actively.” – Tim Davis, Screenwriter

“I trust my intuition more than anything. I usually go with my first initial reaction after reading a script where it comes to creating a character.” – Jeffrey Staab, Actor

“It’s the director’s vision of what he is really allowing you and focusing your eyes to see.” – John Carpenter, Film Historian and Preservationist

My interview with Ron Greenfield can be found here: