My posting of the Paul McCartney pic should assure you that I do in fact know who Paul McCartney is. However, a few days ago as I’m sure you heard, this happened:

If your social media feeds are like mine, you saw (or maybe yourself posted) many a message of woe that civilization is lost because a new generation of young people don’t know who Paul McCartney is. These HANDFUL OF TWEETS even got coverage on national outlets like number one rated morning show “Good Morning, America.”

However, if one digs just a little deeper there’s this probably not-as-widely read piece about the “Unknown Paul McCartney” scandal: http://www.billboard.com/articles/news/6429435/kanye-fans-asking-who-is-paul-mccartney-joking

I was quite disturbed by this whole affair – and not by people who didn’t know who Paul McCartney was. But rather by the vitriolic rage that’s spewing from a no-right-to-be-this-indignant older generation.

Let’s just say for the sake of argument that these Kanye fans were not joking and that they genuinely had no idea who Paul McCartney is.

First of all, the number of fans tweeting this is so infinitesimally small it in no way could be used to gauge the overall knowledge of their respective demos at all. It was worth no press coverage at all. A few people not knowing something that’s accepted common knowledge is not a story.

Secondly, there’s a very important question people forgot to put this into its proper context. Some young people on twitter don’t know who Paul McCartney is – Why should they?

Seriously, why should anyone under 25 be THAT familiar with Paul McCartney. “He’s a cultural icon.”  Yup. He sure is. Paul McCartney changed music, culture and maybe even the whole world itself thanks to his work with the Liverpool skiffle band, The Beatles. And his work with Wings and his solo career is more than enough to get anyone get on their knees and say “We’re not worthy.”

Paul McCartney, if you’re reading this, if we ever meet, the first pint is on me.

But Paul McCartney, I think would also be the first to agree that maybe today’s generation isn’t really all that familiar with the music that was the cultural norm OVER FIFTY FUCKING YEARS AGO. Maybe, just maybe, that’s why Paul McCartney is recording with an artist much more in tune with today’s audiences. An artist like Kanye West.

It’s easy to look at a 15 or 20 year-old who doesn’t know all the words to “Yesterday” and be like “What? You don’t know that song? What’s wrong with you?”  But honestly, think about how much of a dick move that is.

The Cultural Zeitgeist is not, as many aficionado would have you believe, a sacrosanct permanence. It’s more fluid than a raging river changing all the time in ways faster than we can keep up with.

The kids today are not growing up on the things we grew up on. And they shouldn’t. Today’s Doctor Who fans watched David Tennant & Matt Smith while my generation’s watched Tom Baker & Peter Davison (and wondered what it was like to see William Hartnell & Patrick Troughton as they aired.) Today’s wrestling fans are not cheering on Hulk Hogan & Randy Savage. They’re rooting for John Cena & Daniel Bryan.  Today’s Star Wars fans will not be watching Empire Strikes Back 50 times over and over again. With hope, they’ll be watching The Force Awakens 50 times over and over again.

One generation is under no obligation at all to spend their leisure time in deference to another. Today’s kids owe it to no one to like or ever even listen to The Beatles. Now of course, I think they should. The Beatles are one of the truly great bands of all time – and not just because they got there first. But publicly shaming anyone who had the temerity to not grow up the same time as you is NOT going to get anyone to agree to a certain line of thinking.

Instead of screaming “What’s wrong with these idiots?!?!?” Maybe it’s a better idea to, I don’t know, introduce them to The Beatles. We all know Millennials. We all know young people who’ve not seen all the stuff we’ve seen. I have a sneaking suspicion they’re interested in quality entertainment and maybe, if presented nicely, would be very open to being introduced said classics.

Maybe instead of hating your nephew because you like U2 and he likes Coldplay, introduce him to U2. He may love them more than Coldplay.

Maybe instead of shaming those younger coworkers for not seeing Ghostbusters – explain why it’s a classic & it’s worth their precious 100 minutes to give it a shot. (I worked with someone who never saw Ghostbusters. She was born two years after it came out. It was never a part of her culture. That is NOT her fault. She doesn’t deserve to be made to feel bad about that.)

Maybe instead of sneering down our noses creating a divide between generations we need to be reaching across the aisle so to speak, because after all, aren’t we all looking for good shit to enjoy?

Besides, it goes both ways. When you were 15 way back in the 1980’s or whenever, did you know who The Beatles were? Ok, you probably did. Media was a lot less crowded then. Besides, Paul McCartney recorded with Michael Jackson (probably for the same reason he’s recording with Kanye.) A friend on Facebook brought up that he knew all about Elvis too.

Also, a bunch of over 30 folks are incensed at people for not knowing Paul McCartney but how many of those folks know more than one Nicki Minaj song?  How many have been to a Lady Gaga concert (I have! It was awesome)? How many can name the bands who are topping the iTunes download charts or are the most-played on the rap stations?

When I first heard the name Iggy Azalea I thought that was a song off the new Primus album.

“But Tim, our generation’s stuff was SO much better than today’s” 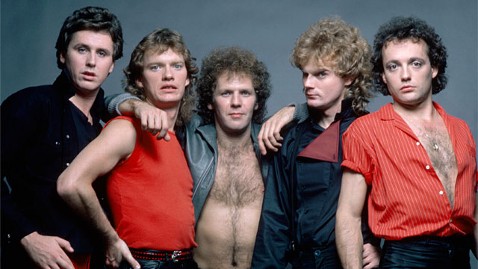 I’ve written about the need to stay current before in regards to screenwriting and I think it’s a topic I’ll be revisiting again and again because I’m a part of a generation that appears to want to keep its feet planted in either the 80’s or 90’s. We’re being dragged kicking & screaming into the 21st Century and have quickly fallen into the “What’s wrong with the kids today?” snobbery that I found so repugnant when I was one of those kids today.

I was very fortunate to be exposed to some great classic rock when I was getting into heavy metal as an angry young teenager (gulp) all those years ago. But if it wasn’t for an older brother who was a diehard Pink Floyd fan playing them all the time, I’m not sure I ever would have picked up any of their stuff. I was too busy moshing to Metallica and Anthrax to care about crusty old 70’s rock. As a film buff, it was The Wall movie that entranced me and I did become a Pink Floyd fan in my teens. Even saw the last US show ever at Giants Stadium in 1994. That doesn’t make me better than younger Floyd fans. It only makes me older than them.

But The Beatles? I bought my first Beatles record when I was 19. Black Sabbath, I believe I was 18. Led Zepplin? I actually got into them in 2002 at the ripe old age of well, as young some of these so-called ignorant, stupid and possibly joking Paul McCartney tweeters. I was into Queen but that was because they were still releasing material (and great material at that) in the late 80’s. When I heard “I Want It All” I had no idea about “Bohemian Rhapsody” or “Fat-Bottomed Girls” or “I Want To Break Free.” And I owe no one an apology for that.

People can get mad at the changing times all they want. Industry pros like us screenwriters, I’m not sure we have that luxury. If we want to write movies that speak to audiences in 2015, we can’t write movies for 1984. There’s a reason why some of the tricks used in Top Gun and Rocky III aren’t going to work today. (“But everyone watches Rocky III on cable.” Sure, and everyone hated Iron Man II.)

People will always want good stories and compelling characters but the delivery genres, styles and platforms are in constant flux. And of course there’s homages & love letters to times gone by. “Foxcatcher” was in my mind astounding but it’s paced for 1973, very very slow and some of today’s audience didn’t respond to that. But while we can wink and high-five our influences in our scripts, we have to constantly be looking forward.

Apparently, the new Ghostbusters will be a total reboot. Fine. If you’re a Ghostbusters purist and you hate the new one, fair enough. The original Ghostbusters are on DVD, BluRay and digital download for you to enjoy in comfort and safety. Because the older generation is owed nothing by the new. Nothing.

I’m not a big fan of Michael Bay’s Transformers movies. But they draw a metric shit-ton of money from a worldwide audience so no need for me to curse Mr. Bay and his hard-working crews names. (I will refrain from my Galvatron is not a truck rant at this time) I have the originals on DVD and can enjoy them whenever I want. I’m not going to see Kingdom Of The Crystal Skull. I’m not going to see Superman Returns. Our media libraries are becoming impossibly vast so that each generation can enjoy what each generation enjoys without throwing stones at each other.

Because here’s the bad news – let’s say those Paul McCartney tweeters were just joking. There will come a day when a large number of young people WILL have to be told who Paul McCartney is. There will come a day when The Beatles will be a dot in the rearview. Their records will be rarities sought-after by only the most die-hard collectibles. Kids may even have to be taught about The Beatles…in school!!!

Sure they’ll be there but like so many gems from the early to mid 20th-Century, you’ll have to look for them.

Railing against the changing times is screaming at a runaway train with no breaks. Culture will shift, change, move on and there’s literally nothing we can do to stop it. We, instead, should embrace it and do whatever we can to spread the merits of what we find important so that maybe it’s then embraced by the future generation. And stays alive just a little bit longer.

From “Doctor Who: The Chase” when a young companion from the future got a chance to finally see The Beatles:

IAN: Well, where are we now?

ANNOUNCER [OC]: This is BBC One. The next programme is due to start in just under one minute.

BARBARA: Vicki, what year have you got on there?

IAN: You’ve got a television.

VICKI: I want to watch it.

BEATLES: I think I’m gonna be sad, I think it’s today, yeah! The girl that’s driving me mad, Is going away.

IAN: Vicki, I had no idea you knew about the Beatles.

VICKI: Of course I know about them. I’ve been to their Memorial Theatre in Liverpool.

BARBARA: Well, what do you think of them, Vicki?

Yes, I see the irony of quoting a 1965 Doctor Who story in an article about staying current. But again, don’t get mad at new Who fans for not seeing those old classics. Tell them why they should. You never know. They just may love it as much as you do.